I can’t believe this is our 13th cover for Show Me magazine!  It has been a delight to work with such wonderful folks who allow us to participate in the creative process, or in the case of this cover, stretch us to do something new.  When Lee shared with us the idea of a group photo including 20 of the area’s high school all-stars, we knew we didn’t have an indoor space large enough to accommodate all of them.  Doing a group shot outdoors, however, leaves something to be desired in terms of really nice dynamic lighting, which we wanted to control.  So we ordered a green screen, even though we had NEVER used one before and thought… “How hard can it be?” (insert maniacal laughter here).

So we started by photographing each teen individually against the fresh-out-of-the-package, crooked green screen.  After uploading them into Lightroom where we did minor adjustments to color, contrast etc., we moved them into Photoshop.  Let me just take this opportunity to say THANK YOU to youtube, where even as a professional, I go when I need a tutorial at 1am.  After trying SEVERAL different methods, I finally found one that helped me to create a Photoshop action to efficiently remove the subject from the green screen. 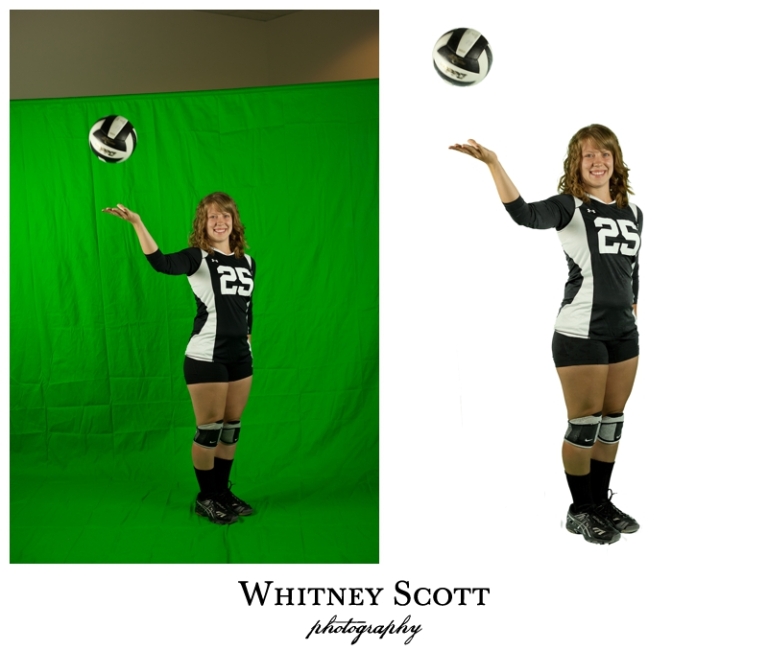 Then I began the process of transferring everybody into the same image….

Then the detail work began.  Like a puzzle, we had to figure out where everybody fit and looked best.  We also had to layer them correctly so nobody had a baseball bat up their nose or a volleyball in front of their face.  ALSO to consider was each person’s size!  They all came into the image at a similar size, so we had to look back at the images to compare sizes (and yes, in the final product there are still some really big guys and some really small girls, but it’s because there WERE some really big guys and some really petite girls!!!).

Finally we started getting close, but then I realized that, as in ALL the work I try to do – my kids were getting in the way….

Until AT LAST we came up with the final image.  And I have to say, for a first attempt, I’m pretty pleased with the result!

As a matter of fact, I was so pleased with all the All-Stars, that I just decided to take them to the beach.  After this we had a cook-out and treated them all to non-alcoholic Pina Coladas.

One thought on “Anatomy of a magazine cover!”